The early pilgrims into the Bulkley Valley could not see the forest for the trees. They had come seeking gold, or furs, or at least open farmland. They tried their luck at all these things, dredging up countless tons of creekbeds in search of nuggets, running traplines, and farming around the stumps of trees that had been burned down to clear land. Little did those early settlers know that the very trees that impeded their travels, covered would-be farmland, obscured their vision, and harboured dangerous animals would one day become the lifeblood of the area. 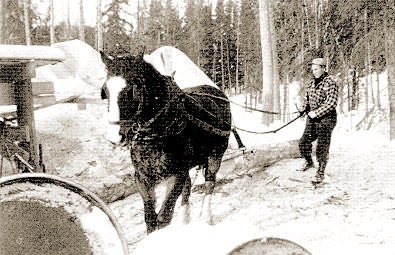 The tie-cutting industry of this area began around 1912-13 when the Grand Trunk Pacific was being built. Houston quickly became a major tie-cutting centre.

The tie season was from about September to April. The railway would only purchase ties cut between these dates because of the belief that wood cut after the sap started running in early May would rot twice as fast as timber cut in winter. (Later, when ties were treated with pressurized tar, this rule no longer applied.) The time frame worked well for farmers, since it allowed them to cut ties in winter when the crops were in. There was a popular saying at the time: there were only two sure crops on a farm, kids and stumps. 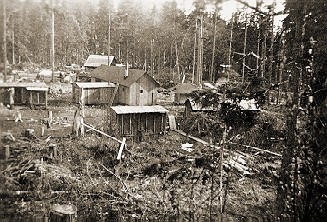 The first ties in Houston were said to have been made by a man named McCrae, who took them out of a patch of timber where the cemetery is now located. When Harry Hagman and his brothers Helge and Harold arrived in Houston from Finland, they invested in a crosscut saw, a broadaxe, a horse and sleigh, and went into the tie-cutting business in the 1930s. The broadaxe was much like a large adze, with a razor sharp single blade that could destroy an operator's leg with a single slip. 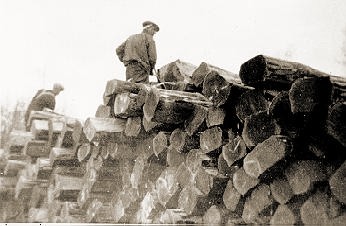 Harry Hagman pulling ties out of Buck Creek flume, before the 1930s.

A tie hacker's reputation depended on his speed and accuracy with a broadaxe. Individual operators sold their products at the side of the rail line. Early tie-makers were paid 18 cents a tie. Tie-cutting continued as an industry well into the century. The first heavy two-man powersaw appeared during the late 1940s, but did not really replace the crosscut saw until the 1950s. 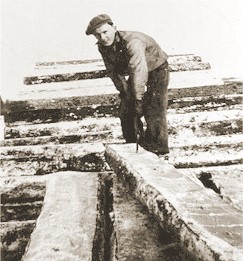 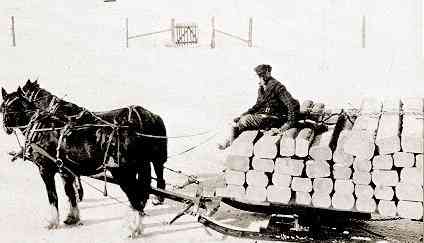 Olof Hanson was a major name in early tie and lumber operations in northern B.C. He had the contract for railway ties from Prince George all the way to the west. In the 1930s Hanson had a tie-making and logging operation in the Dungate Creek area of Houston. He built up a dam in a meadow there, flooded it, and dumped in the ties. In the spring, the high water took the ties down Dungate Creek, into Buck Creek through a flume. (Part of the dam is still visible in the Dungate Meadows.) The ties ended up in a loading yard close to where the NWCC complex is today. Hanson imported Swedes to pull the ties out of the water with pickaroons and load them into boxcars. It seems that the Swedes were the people who could best handle the heavy workload. 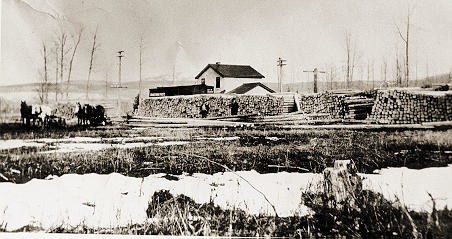 There was a CN spur or short railway back then that crossed the highway and ran on towards where the NWCC complex is today. Morice Bellicini remembers that there was room for about 20 boxcars on that spur, which were loaded all at once during spring break-up by about 15 to 20 workers.

In the early 1930s a man named Andrew Birrell made a portable sawmill for his own home and farm use, but it was not until about 1940 that portable sawmills were established in Houston on a business basis. It was around that time that Harry Hagman bought a portable gas powered sawmill, and proceeded to take the mill to the trees, not the other way around as is done today. Small mills became all the rage. 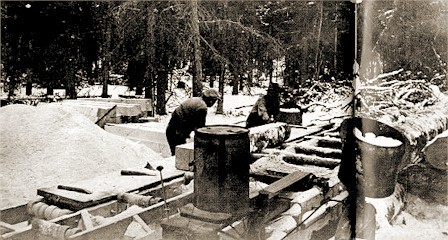 Harry Hagman built his sawmilling empire from these humble beginnings.

In 1949 there were 42 mills in the Houston district, and by 1958, according to local old-timers, there were between 67and 84 mills in operation. These small mills cut only rough lumber, and E.G. Bellicini was quick to spot an opportunity. In early 1940 he started the first planer in Houston. By 1952 Bellicini was buying rough lumber from 14 different sawmills and was shipping one to two boxcar loads of wood daily year round. His planer was located north of Highway 16 as it ran through town. Today the World's Largest Fly Rod occupies the space where Bellicini's planer was located.

The Swedish gang mill, long a proven method of sawmilling in Scandinavian countries because of it's accuracy and fine saw kerf, had long been Harry Hagman's dream. He bought part of the Wilkinson farm (now Houston Industrial Park) around 1947. He put up a stationary mill housing two gang saws, complete with edgers and trimmers. Later he added dry kilns, a more modern planer, de-barkers, and chippers, eventually growing to a four-kiln operation. At its peak, the operation employed 200 men. It was managed since 1955 by Claude Parish, who was the inspiration behind many of the moves made by the company. During its operation, Buck River Lumber never slowed down or shut down, regardless of market conditions. 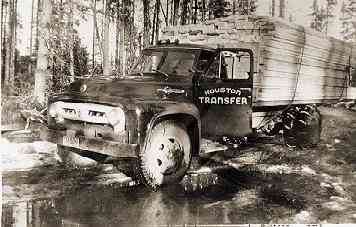 With the arrival of the gang saw, the logs were brought to the mill, not the other way around. Logging trucks appeared on the scene. Harry Hagman owned the first logging trucks, and hired drivers for them. He had about four or five to begin with. They were yellow trucks hauling short logs and pulled a "pup" trailer carrying more logs. Hagman bought out many of the small mill operators and had wood brought into town. Around 1956 he reconstructed the road to Parrott and Sam Goosly Lakes via the old Telegraph Line. This made more trees accessible. Hagman controlled the lion's share of the annual allowable cut.

Hagman's ultimate dream was to build a pulp mill in Houston. In 1963 he was part of a group of local lumbermen who formed a company called Bulkley Valley Pulp and Timber, and together they pursued the idea of a pulp mill. In 1966 they obtained a Pulp Harvesting License, covering 40,000 square miles of timber. But financing was not to be, and Hagman sold his mill in 1968 to Bowater-Bathhurst. The new owners promised big things for Houston - including a pulp mill.

Construction of what was to be one of Canada's largest integrated forest product complex began in 1969 four miles west of Houston. The town of Houston grew from 750 to 2000 people. But two years after it opened Bulkley Valley Forest Industries, Bowater-Bathhurst, in deep financial trouble, sold its Houston operation to Northwood and pulled out of town.

When Noranda (Northwood) bought BVFI, ninety Houston employees were laid off. Northwood made it clear that it did not inherit Bulkley Valley Forest Industries commitment to building a pulp mill in Houston. It was a rough time for Houston during the transition because the unemployed had nowhere to fall back on. Small business operators who had sold out to big business were no longer in operation.

Doug Keller was a front man at Northwood back then and remembers that the only real answer to success lay in "running it lean and mean". Northwood trimmed excesses that were contributing to the operation's troubles, and production improved almost overnight. Northwood recognized the long-term and stable wood supply in the area and concentrated on developing the sawmill aspect of the complex.

The mill now has a proven record of success and in 1995 celebrated 25 years of operations in Houston.

In 1998, Northwood Pulp and Timber employed 400 mill and staff workers directly, with an additional 500 employed under contractors in logging and silviculture.

The Northwood mill was taken over by Canadian Forest Products in late 1999 and became known as the Canfor mill.

Houston Forest Products was officially opened by B.C. Economic Development Minister Don Phillips on August 16, 1978. It was the result of years of planning by Eurocan and Weldwood. This mill was not quite as large as Northwood but was among the most modern mills in the province. The first two shifts at the mill produced 400,000 board feet of lumber. 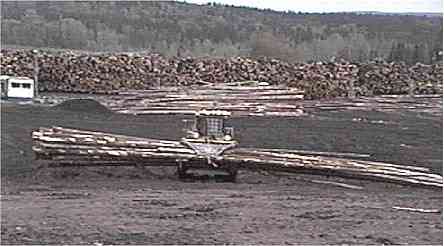 Logging in the 1990s - what a difference from tie-hacking days!

In 1998, HFP produced 250 million board feet of lumber annually. It employed 285 on site, with an additional 150 employed under private contractors.

The two mills in Houston, Northwood and HFP, together produce enough lumber annually to rebuild the capital city of Ottawa.

Not all small mill operations ended when Harry Hagman built his gang mill or when Northwood and Houston Forest Products began operating in Houston.

A few small business operators (as they became known) persisted then and others persist to this day, although not without certain struggles. Competition with the larger mills was often difficult. In 1986, small business operators such as Haftner and Sworyk pleaded with the Forest Service for more wood. Generally they were awarded wood in difficult areas such as blowdowns, beetle attack, and burned area. In 1986, only 4.5% of the annual allowable cut was given to small mill operators.

In 1998, two remanufacturing plants operate in Houston. Pleasant Valley Remanufacturing, with 25 employees, and Corwood Timber Products, with a dozen employees, take what would otherwise be waste wood and turn it into usable products.