According to the diary of the late Mrs. Nora Aitken, mother of Nancy Goold and Betty Dungate, the first passenger train puffed through Houston on October 5, 1913. Mail car service started February 28, 1914.

In 1903, then Canadian Liberal Prime Minister Sir Wilfred Laurier presented a bill to the House which would provide for the construction of a railway from Winnipeg, across the prairies, through central B.C. to the coast, resulting in the development of another port on the Pacific - Prince Rupert. This would open much of B.C. to new settlers. Until this time very few people except for Hudson's Bay employees, prospectors and miners, and those involved in the Telegraph Trail project had been north of Quesnel. The coming of the railway would open land for agriculture, where it was said that grass grew as high as a man's shoulder, and where existed much fish, game, fur, minerals and timber.

The Grand Trunk Pacific, as the railroad was then called, was built by Foley, Welch, and Stewart. The first contracts were let in 1908, and construction started from both ends - Winnipeg and Prince Rupert. Each day about two miles of track were laid from the Winnipeg end. It was 1912 before the steel track reached the Alberta-B.C. border, and by 1913 it was at Prince George. The track begun at Prince Rupert was laid with great difficulty along the Skeena River, and progressed much more slowly. 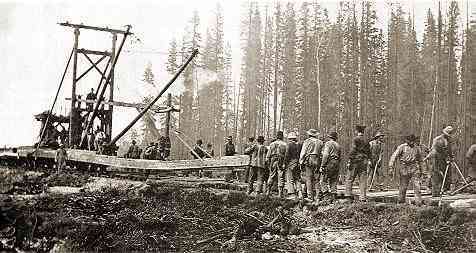 The railway was built through Houston from 1912 on. Construction camps on the right-of-way were quite large, with about 100 men to each camp. There were men from the U.S., England, Ireland, Scotland, Finland, and China in the camps, while the steel-laying crews consisted mostly of Ukrainians. They lived in small tents or cabins made of poplar, spruce or pine, and did the back-breaking work with wheelbarrow, pick and shovel, and sometimes with the help of a horse.

The two ends of the railway were finally joined on April 7, 1914 when the last spike was driven about a mile east of Fort Fraser. Thirty-six hundred miles of steel now joined Halifax to Prince Rupert. (The southern route, the Canadian Pacific Railway, had already been completed before the turn of the century.) 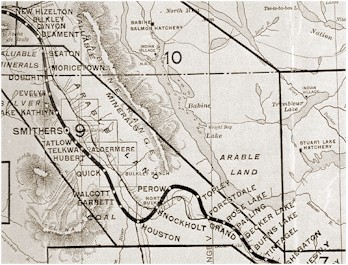 Issued in 1911 by the Grand Trunk Pacific Railway, this map promoted the agriculture potential of B.C.

Financial difficulties developed shortly after the railway was completed, and on September 1, 1920, the Grand Trunk Pacific was sold to the federal government. From that time on it was known as the Canadian National Railway.

The railway was not all good news. The coming of the railway meant the end of steamboat and pack train operations, and the end of an era, especially in the region from Hazelton to Prince Rupert, where jobs were lost.

But the bonuses were immense. By the 1920s Houston had become a railhead for people living in the west end of the Lakes District. Settlers came to Houston via the Parrott Lake/Buck Flats trail for supplies and mail. The population in the Bulkley Valley boomed from about 75 in 1905 to more than 1200 by 1920, and continued to grow from there.

At first, to accommodate the section crews, there were railway stations every five or ten miles throughout this area: at Topley, Perow, Knockholt, Houston, Barrett, Walcott, Quick, and so on. 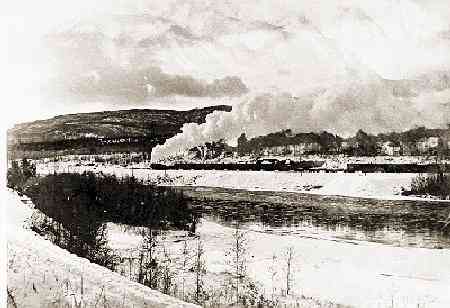 The first railway station built at Houston was destroyed by fire, but a new station built in 1925 was one of the best and most modern along the line - it not only served as a rail station and telegraph office, but dances and church services were often held in its spacious waiting room. It was torn down in 1971 when a more modern building was built in its place, which stands to this day.